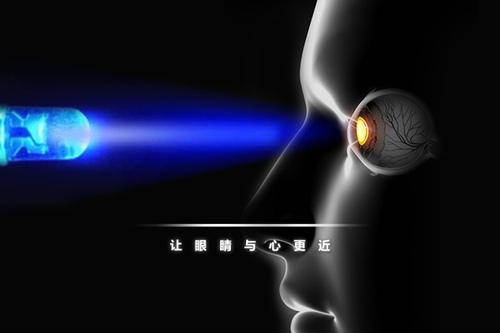 Blue light is a short-wave high-energy light having a wavelength between 400 nm and 480 nm.

The blue light in this wavelength will increase the amount of toxin in the macular area of the eye, which seriously threatens the health of our fundus.

Blu-ray-induced blind eye disease, the current effective solution is to film screens or lenses. The anti-blue film technology is very mature and low in cost, which can effectively prevent blue light from penetrating.

Not all blue lights are harmful, what is really harmful is blue light having a wavelength within 400 to 440.

Related to it, it is beneficial to the human body. Moreover, short-wave blue light will definitely cause harm to the human eye, which is related to the irradiation intensity and the irradiation time. When the illumination reaches a certain level, it lasts for more than two hours, and it is possible to damage the retina.

As early as 1966, Nell et al. found that blue light irradiation can cause damage to retinal cells, leading to visual impairment or even loss.

Furthermore, short-wave blue light between 400-450 nanometers is the most harmful to the retina. 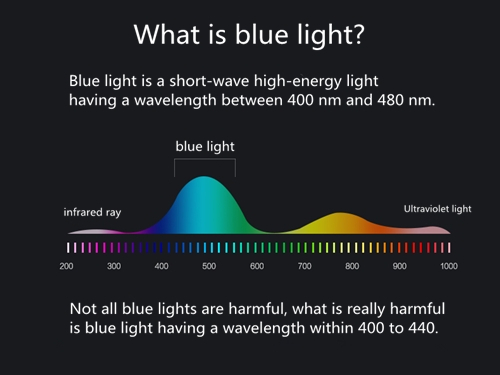 At the 2010 International Light Association Annual Meeting, the world's top optical experts unanimously pointed out that short-wave blue light has extremely high energy and can penetrate the lens to reach the retina.

Blue light illuminates the retina to produce free radicals, which cause the retinal pigment epithelial cells to die.

The decline of epithelial cells causes light-sensitive cells to lack nutrients and cause vision damage, and these damages are irreversible.

Generally speaking, the harms of blue light to human body are as follows:

Nowadays, it is impossible to leave computers, notebooks, tablets and other digital products, which can be used for work, life and entertainment without leaving home.

All of this is displayed by screens. While improving work efficiency and enjoying entertainment, you should also notice that your eyes are being hurt by Blu-ray.

Where Are You Exposed to Blue Light?

The largest source of blue light is sunlight. In addition, there are many other sources:

Blue light exposure you receive from screens is small compared to the amount of exposure from the sun.

And yet, there is concern over the long-term effects of screen exposure because of the close proximity of the screens and the length of time spent looking at them.

But according to Rahul Khurana, an ophthalmologist and clinical spokesperson for the American Academy of Ophthalmology, digital eyestrain and the negative effects of blue light on your eyes are two separate concerns.

“We keep on thinking about blue lights from our computers and smartphones, but the reality is we 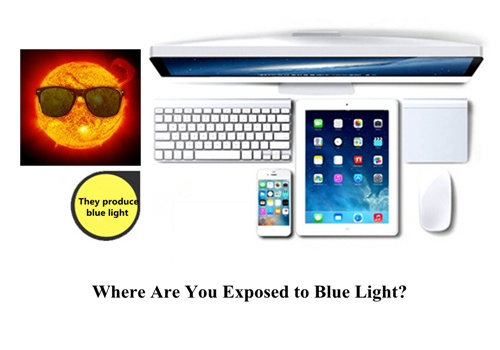 get more exposure from blue light from the sunlight.” It’s not the blue light that’s making your eyes feel bad after a day of staring at the computer — it’s staring at a screen for hours without breaks.

The digital eyestrain that bothers most people can occur “whenever you focus on anything, from reading a book, looking at a screen, or watching TV,”

says Dr. Khurana, and it can be alleviated by shifting your eyes every 20 minutes or so onto something that’s 20 feet away for at least 20 seconds.

When computer blue light protective glasses can be useful, though, is at night, when blue light from screens can disrupt natural sleep patterns.

Our bodies associate blue light with daytime, so being exposed to it when you’re trying to go to bed “pushes our internal clock later so that it’s harder to fall asleep and harder to wake up in the morning,” says Cathy Goldstein, an assistant professor of neurology at the University of Michigan Sleep Disorders Center.

In a perfect world, you’d start to avoid blue-enriched light from screens four hours before bedtime. “That is hard for a lot of people to swallow,” 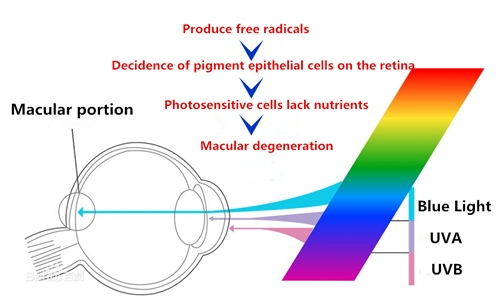 sses at that time.”

And there’s a growing body of research to back up the claim that blocking blue light before bed can help you sleep better. In one study, from 2009, volunteers who wore computer blue light protective glasses three hours before bedtime reported better sleep quality and mood than those who didn’t. A more recent study of teenage boys found similar results.

The harm of blue light to the human eye is mainly caused by eye pathological damage and human rhythm damage leading to myopia, cataract and macular degeneration.

harmful blue light has extremely high energy, can penetrate the lens to reach the retina, causing atrophy or even death of retinal pigment epithelial cells.

The death of light-sensitive cells will result in decreased or even complete loss of vision, which is irreversible. Blue light can also cause macular degeneration.

Especially the children's crystals are clear and cannot effectively resist blue light, which is more likely to cause macular degeneration and cataract. 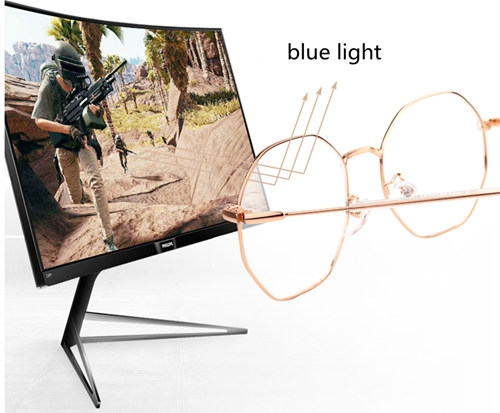 2)       blue light damage second visual fatigue: due to the short wavelength of blue light, the focus point does not fall in the center of the retina, but a position closer to the front of the retina.

To see clearly, the eyeball will be in a state of tension for a long time, causing visual fatigue. Long-term visual fatigue may lead to deeper myopia, double vision, easy serialization during reading, and inability to concentrate, which affects people's learning and work efficiency.

3)       blue light harms the third sleep well: blue light will inhibit the secretion of melatonin, and melatonin is an important hormone affecting sleep, the current known role is to promote sleep, adjust the time difference. This also explains why playing a mobile phone or tablet before going to bed can cause poor sleep quality or even difficulty falling asleep.

5)       Since short-wavelength light has a relatively high energy, the incidence of fine particles in the air is high, which is the main cause of glare. Patients with retinopathy and post-operative surgery (excimer surgery, cataract surgery) are very sensitive to light and can feel abnormal glare, which is also caused by short-wave blue light.

7)       When the visible light is focused in the eye, the focus is different, and a focal distance difference is formed between the two focal points. This is the main reason for the blurring of vision.

There are two types of people should not expose their eye to intensive blue light directly.

1)  The first type is children with delicate eyes. The lens of infants and young children is more  clear, and it is impossible to filter blue light. The child has the nature of chasing light. It is exposed to a lot of blue light for a long time, which may cause phototoxic damage to the retina of the child. It can cause cracks in the retina, leading to blindness.

2)  The second type is diabetics. After more than a decade of development, diabetes has retinal lesions. The value of retinal light damage is greatly reduced. In addition, many drugs in life are photosensitive. After taking the medicine, LED blue light The damage may be more pronounced.

3)  Finally, it is not advisable to use LED lights at night. Long-term use will affect sleep, causing disturbance of the biological clock, thus reducing human immunity.

1)       First one realizes the anti-blue light function through the film layer,

The lens is basically transparent, and the film layer is mostly blue, so the background color of the lens presents a pale yellow visual effect.

2)       Second one is made by adding special materials to the lens during the production process, and the lens itself will show a yellowish visual effect.